Our vision for reconciliation

Our vision for reconciliation is to provide leadership to others in supporting relationships that are respectful, welcoming and inclusive of Aboriginal and Torres Strait Islander people.

We recognise that unless we are committed to reconciliation through a practical action plan, the small and significant changes necessary to shift from positions of racism, ignorance and tokenism will not be achieved. We believe that our Reconciliation Action Plan will provide practical strategies for building and renewing deeper partnerships and engagement with Aboriginal communities, organisations, families and individuals so that we can learn from each other as we work to build a more equitable and socially just nation. 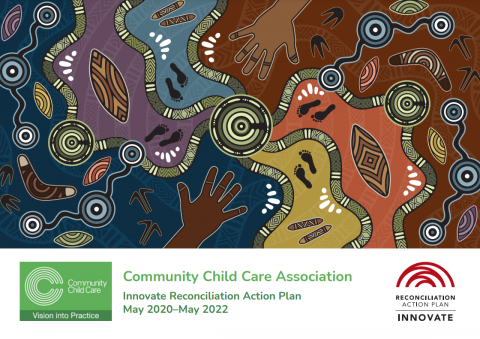 ‘I’d never heard of a Reconciliation Action Plan until 2017 when Community Child Care Association launched their first RAP at an event I attended. I thought – this is something we could do. After some research and conversations, I realised it was something I really wanted for Spensley Street OSHC.

Since then, I’ve worked with the school community to create a school-wide RAP. I’ve made so many new connections throughout this reconciliation process. Those conversations have been positive, important and sometimes confronting.

When I started this process, I was scared to make mistakes and say the wrong thing. I’ve learnt to have the courage to ask questions, and to really listen to the answers. I’ve had my eyes opened to the truth about Australia’s history. When I brought the idea for a RAP to my school, so many interested people came out and engaged – I’ve been so encouraged by the conversations I’ve had with families and teaching staff, and the enthusiasm from the community. The children have always been willing learners of First Nations culture and history.

I’ve spoken to a lot of coordinators and directors who are thinking about starting their own RAP. My advice is: take the plunge and make it count. Support and resources are there for you.’